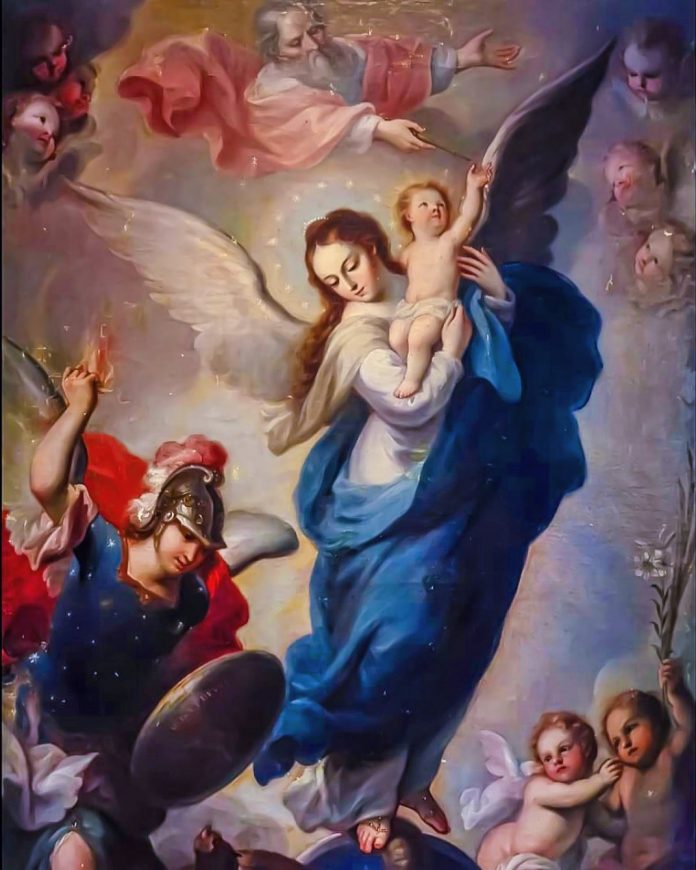 On the  other hand, many  theologians and saints were skeptical about the  concept of   immaculate conception. Bernard of Clairvoux and Thomas Aquinas  belonged to this  school of thought.  Their reasoning was simple. If  Mary was free from  original sin, there was no need for redemption. Then  Jesus Christ’s mission on earth was superfluous. It was Duns Scotus who gave a logical reply to their doubts. According to him, immaculate conception was the  most noble example of  redemption.  In other words,  if the  reason for  the  salvation of any other  person is the   merits of  Jesus Christ,  the  reason  for  Mary’s  immaculate conception was  also the  merits of   Jesus Christ.

Doubts arise when we say  that only  one  person  among those billions that  lived on earth was  born without original sin. Eadmer, the famous English historian, theologian and   ecclesiastic  gave a simple reply.  ‘Potuit, decuit, fecit.’  Translated into English, it reads: ‘It was possible (for God), it was fitting, therefore it was done’. Should we  think more  about it?

In 1830,  it was revealed to  Catherine Laboure in France that   the Mother of God was immaculate. In 1854, Pope Pius IX declared the  immaculate conception  of Mary as a dogma through his decree ‘Ineffabilis Deus’. With this proclamation, the  position of the  Catholic Church  regarding this contentious issue  was finally  clarified. One interesting  fact  related  to this  important   declaration from the Vatican was that the  Pope had  consulted all the bishops to ascertain  their  views in this  regard. Almost 90% of the  bishops   held  the  view that  Mary  was   immaculate and  supported the  move to  declare it as a dogma of the Church.  This is ample evidence for the  esteem with which churches and  denominations across the  globe  regarded the  immaculate conception of the  Mother of God.

Yet there can be  some   others  with  doubts still remaining in their minds. And we should not be surprised by it. It is impossible for those who fall prey to the  volley of  false teachings  that the ‘serpent pours from his mouth like a river to sweep her away with the flood’ (Rev 12:15) to grasp the mystery of  Mary’s immaculate conception. Perhaps Paul the Apostle had  such people also in his mind when  he wrote these lines. ‘Those who are unspiritual do not receive the  gifts of God’s Spirit, for they are  foolishness to them, and they are unable to understand them because they are  spiritually discerned’ (1 Cori 2:14)

To a  worldly man the  doubt is, ‘how can this be?’  We can give them  a  humble reply only. ‘Nothing is impossible  with God’. The Catechism of the  Catholic Church teaches: ‘Mary benefited first of all and uniquely from Christ’s victory over sin: she was preserved from all stains of original sin and by a special grace of God committed no sin of any kind during her whole earthly life (CCC 411). The Church goes on to  teach that the efforts of the  serpent to  drag  Mary into sin met with failure. “He pursued the woman” but had no hold on her: the new Eve, “full of grace” of the Holy Spirit, is preserved from sin and the corruption of death (CCC 2853).

It was their sin  that cost  Adam and Eve their life. They in turn transmitted this sin  to future generations. The Church teaches that  this  inclination towards evil  that we call original sin is being  ‘transmitted with human nature, by propagation, not by imitation ‘ (CCC 419). It is  not  a difficult statement to understand these days when  we have plenty of scientific  evidence to  explain how the  traits of  parents are   transmitted to  their children.  Every human being is   supposed to   get a  share of  what  their  parents hold, be it  sin or virtue.  If Mary alone  was  excluded from the burden of original sin  that was  destined  to  all  the  children of  Adam, it was because  God  willed it to be so.

It was also the  Divine Will of the  Father that  His only begotten Son Jesus should be the ‘high priest, holy, blameless, undefiled, separated from sinners , and exalted  above the heavens’ (Heb 7:26). Job asks; ‘Who can bring a clean thing out of an unclean? No one can.’ (Job 14:4). The Book of Sirach also tells about the impossibility of  getting  good results  from  something bad. ‘ From an unclean thing, what can be clean? And  from something false what can be true?’ (Sir 34:4). This  general principle is applicable to mortals   born of ordinary women.

All of Adam’s children were   given a mortal  body as  inheritance.  We cannot expect  something immortal to   come from a mortal body. It doesn’t need much  explanation to conclude that  it is impossible for any of the  children of  Adam to conceive  and  give birth to a person like  Jesus Christ, who  was  ordained to conquer the  last  enemy called death. If  God the Father in his  infinite  wisdom and in anticipation of her selection to become the  mother  of  the Saviour,   decided to keep Holy Mary  away from all stains of the  sin of  Adam and Eve, why should we  be surprised? Why should we think that  it was  impossible for God to  create a woman  who is  holy, blameless, undefiled,  and separated from sinners so that  at the  appointed time the  Word became flesh in her?

Now let us  examine  the  immaculate conception  from another angle.  We know that  the blood of  a mother never mixes with the blood of the child in the womb. Even the  blood groups of the  mother and  child could  be different. And their Rh factors (-ve or +ve) too can be  different. The relation  between  a mother and   her  child in her womb is of  a peculiar  nature where   oxygen and  nutrients are   drawn from the mother’s body  to   the child through placenta and umbilical cord. God has been so particular in designing the human body in such a way that during this  regular exchange of   oxygen and  nutrients from mother to   child and  of carbon dioxide and waste products from   the child to mother the  possibility of mother’s blood getting mixed  with the  blood of the child is  ruled out. The placental membrane separates maternal blood from fetal blood. The system  makes sure that  oxygen and nutrients in the maternal blood  diffuse through the walls and enter the fetal capillaries directly.

We are aware of  certain artificial  reproductive methods like I V F where the egg from a woman is  manually  combined with  the sperm and then the resulting  zygote placed in the uterus. When  a woman is  not capable of carrying the  pregnancy  for  medical or other reasons, the services of a surrogate mother is also utilized.  We know that  the Church does not  encourage  such types of  artificial reproductive methods as they are  unethical and  runs against faith. The reason for mentioning such  an unethical  medical procedure here is to   bring home the  point that   it  is perfectly possible for a fetus to  draw oxygen and nutrients  from a woman  other than the biological mother, and develop into a  full grown  baby.  We know that  none of the  traits of the  surrogate mother are  transmitted to the  child  during the   period of pregnancy, because her  blood  never mixes with the blood of the  fetus. On the other hand, even while  living inside the   womb of another  woman   and depending on her  for  everything essential to  sustain  life, the  child never  fails to inherit  the  traits of  its biological parents.

Then is it not  possible for God to  place a holy embryo that is not stained by the  original sin of either Joachim or Anna into the  womb of  Anna? We have no difficulty in  believing  the Bible verse; ‘The Holy Spirit will come upon you, and the power of the  Most High will overshadow you’ (Lk 1:35). We have no difficulty in believing that  a baby can  live and  grow in the  womb of a  surrogate  mother  and at the same time    save itself from  inheriting   her  traits. We have  no  doubt in the  ‘growth of  science’  that  can generate  any number of  perfect copies of  a living organism  including human beings through the process of  cloning (again an  unethical procedure) that  does not require   sexual  contact between a male and a female.

But it is  strange  that  we find it  difficult to  accept the  immaculate  conception of the  Mother of God as true. When we say that Mary was  saved by God from the  stains of original sin that  is transmitted  through generations, we  are simply acknowledging a  Marian dogma proclaimed  by the Church after   studying   and discussing  the  issue in detail during a  rather lengthy period  of   eighteen centuries.  There is  nothing   new in it. The Immaculate conception   of Mary was a  historical fact. It was  believed to be so  by millions of Christians.  If we cannot believe it, the  reason is our own incapacity or unwillingness to accept divine truths.

Tradition says that Mary’s parents were getting on in years and it was  not possible for  Anna  to conceive in the natural way.  The very fact  that  a woman who is beyond the possible age for natural conception, giving  birth to a child is in itself, a miracle. But we have seen such instances in  the Bible. For example, Isaac was born to  Sara when she  was  eighty years old  and was barren. John the Baptist was  born to  Elizabeth when  she was  aged and was considered barren.

Had Sara and Elizabeth conceived in their fertile years, it would not  have been treated as miracle. In the same way  had Anna given birth to Mary during her  years of fertility, it would have been  impossible to believe that  Mary was born immaculate. In that case the number of persons  who doubt  the  immaculate  origin of Mary  would have been  more than what we see today.

As for Mary, it was  the will of  God the Father that what was  impossible naturally should be   executed  supernaturally  so that she may play  her  role  in  the salvific plan  to be   completed by her  son, Jesus Christ. The mystery of  immaculate  conception is that  God in His  infinite wisdom prepared Mary beforehand as a worthy vessel to carry  His beloved son, who was to   save the world. As for the  scientific proof  we discussed earlier, they are nothing but a reply to  those of our  generation  who are still skeptical about  the  immaculate   conception of  Mary of whom the  Bible says that  ‘from now on all generations will call her blessed’.

But  why should we go for  scientific evidence? What is actually needed is childlike faith. Because  the  immaculate conception of the  Holy Mother of  God is a mystery and it  will remain so. It is  ‘hidden  from the wise and the intelligent and  revealed to the infants’. With  Jesus we can also proclaim; ‘Yes Father, for such was your  gracious will’ (Mt 11:26). The basic qualification to  understand  immaculate conception, or for that matter any divine mystery, is to  acquire a   pure heart. And the  way to  get there is to  consecrate  ourselves to the Blessed Virgin.

Let us pray:  Holy Mary, conceived without  sin, pray for us sinners.