Vcatholic
Home Articles For Him 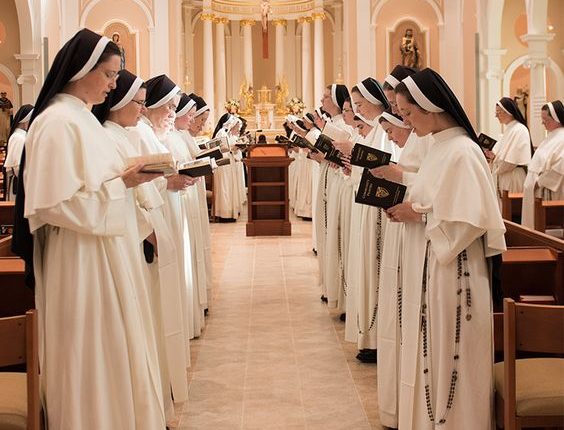 Indeed it is something difficult to  understand, and  Jesus knew it well, and he was  candid in admitting it. ‘Not everyone can accept this teaching, but only those to whom it is given’ (Mt 19:11). Still not satisfied whether his disciples could follow his advice,   Jesus adds a postscript too.‘Let anyone accept this who can’ (Mt 19:12).

We read about a eunuch who was so blessed with  grace in the   Book of Acts, that he  was able to accept the good news with an open heart when Philip explained the word of God to him. His conversion was so  instant that he demanded baptism  the very moment! The Scripture tells us that after his encounter with Jesus, this man ‘went on his way rejoicing’ (Acts 8:39).  We are not sure whether this  man was  a eunuch from  birth or he was  made so by others. Either way, he went his way rejoicing.

We know women who  go their way rejoicing after meeting their Lord and  committing their  future life to   him.  We call them nuns. They are often insulted, mocked, humiliated and scoffed at. Like  daughter Jerusalem (Lam 2:15) ’All who pass along the way clap their hands, and hiss and wag their heads at them’. They stoop down to the  level of  comparing the habit, especially the veil of  nuns to a reprehensible instrument invented  in the seventh century to make  women  subservient in a  patriarchal tribal society.

Some others are pained about the life of a nun  who is confined within the  convent ‘without any freedom’. On their  part  the media also highlight with unimaginable enthusiasm, stray cases of  one or two  nuns breaking their vows. In their insatiable desire to  go sensational they often target  nuns.

Why are our nuns treated so badly by society  in general and the media in particular? There is only one  answer. Those who criticize and blame nuns could not  grasp the meaning of the  sacred vocation  that  the  nuns have accepted. The grace to understand  the  mystery of vocation is obscured from their eyes  that are already blinded by their over- dependence on reason and total negation of faith. If we appreciate this fact, we  can, at least, look at those poor souls with sympathy. They judge things with limited human intelligence. It is natural that  any  judgment of  spiritual  things using the  yardstick of material  knowledge is  bound to fail. Paul spells  out the reason. ‘Those who are unspiritual do not receive the gifts of God’s Spirit, for they are  foolishness to them, and  they are unable to understand them because they are  spiritually discerned’ (1Cor. 2:14).

Those who   revel  in  material pleasures  can never understand the  true joy that is characteristic of  asceticism. They  make the   generalization that nuns  are also like them and  measure the life of  a nun with the same scale  that they  invented for  their  convenience. On the other hand  those few who truly appreciate the golden statement that ‘the flesh is useless’ (Jn 6:63) will never  mock the brave ones who voluntarily opted for a monastic  life.

True nuns are those who were  lucky to  find  out the  treasure  hidden in the field. They  had taken the  worthy decision to  exchange everything they possessed to buy the land. To the onlookers, their life would seem eccentric. But for the nuns, they fix their eyes  on  things up in heaven. Like Mary of Nazareth, they also know  at the time of giving their ‘fiat’ to the call of their Lord,  that sufferings, persecution,  and insults are  going to be their  companions.

Those who scoff at them now seldom  know whom they attack. But a day is coming. Then ‘the righteous will  stand with great confidence in the presence of those who have oppressed them and those who make light of their labors’ (Wis 5:1). Then those scoffers ‘will speak to one another in  repentance, and in anguish of spirit they will  groan, and say, “These are persons whom  we once held in derision and made a byword of reproach- fools that we were! We thought that their  lives were madness and that their end was without honor. Why have they been numbered among the children of God? And why is their lot among saints? So it was we who strayed from the  way of truth” (Wis 5:3-6). If the fate of those who  derided Jesus was this way, it will be  no different for those who jeer at nuns who leave everything behind  and  follow the Lord through the  arduous path of asceticism.

Except  for certain  religions that still follow the  errors propagated from  early middle ages, monasticism is prevalent in most religions. But the difference in  monasticism as practiced in Christianity and other religions  is notable in that  in Christianity it is more organized and structured. This has also been a  reason for  criticism against it.

Contrary to what critics say,   the monastic  life of  Christian women is not a  recent invention. There were Desert Mothers who followed Desert Fathers, and  led a life of  seclusion. Some others  started living in communities. Both were called ‘Amma’ which translates into ‘Servant’ (of the Lord). Amma Syncletica, Theodora, Amma Sarah of the  desert, Melania,  and St  Paula were prominent in the list of   early desert mothers.

What the Holy Bible says about priests is  applicable to  nuns too. ‘One does not presume to take this honor, but takes it only when called by  God,  just as Aaron was’ (Heb 5:4). Someone becomes a  nun only because   God  called her to  a life  detached from this world. Majority of those who  level unwarranted allegations against  the  life of nuns  are those who  fail to  acknowledge that God  does call certain persons to  accomplish  certain missions.

Among them are atheists, non- believers and  also  lukewarm believers in great numbers.  There are others who have gone wrong in their  knowledge about God. Another  group is of those  who ‘ though they knew God, they did not honor him as  God or  give thanks to him, but they became futile in their thinking, and their  sense-less minds were darkened’ (Rom 1:21). Among the critics  are also those who, in spite of being  ignorant in spiritual matters, claim themselves to be wise, and in that process become fools’ (Rom 1:22).

The role model of every devout  woman is  the Blessed Virgin. If she was allowed to go through a life of sorrow,  her daughters are also  called to go through the same experience. At least they should expect  a portion of what their mother went through. If you find a nun who was not subjected to any kind of  ridicule or  derision, it means that they seriously lack something vital in their monastic life.

It was  Jospeh, the just husband of Mary who  saved her from the ignominy of being branded as a woman  who became  pregnant before marriage.  Good husbands  shelter their  wives from  every  attack, every allegation. As for nuns, their bridegroom is  Jesus Christ and he  being the  son of Joseph  will never fail to  protect his brides  from the evil eyes of the world. It is an established fact that  not a single nun who sought  consolation from  any other  source   completed  her  race to satisfaction.

‘Brides of  Jesus Christ’ is not a misnomer. Dear sisters, stand up  against those who  make even that name to mock you.  Be assured that  your reward is guaranteed,  but not in this world. On the other hand, no nun who worked for a reward from this  world  could ever claim that  she was faithful to her vocation.

Let us pray: Blessed Virgin Mary, queen of virgins, pray for  our nuns.

Total Consecration to Jesus through Mary Day 3 of 33

Quotes On Visit To Blessed Sacrament

The Fifteen Promises Granted to those who Recite the Rosary