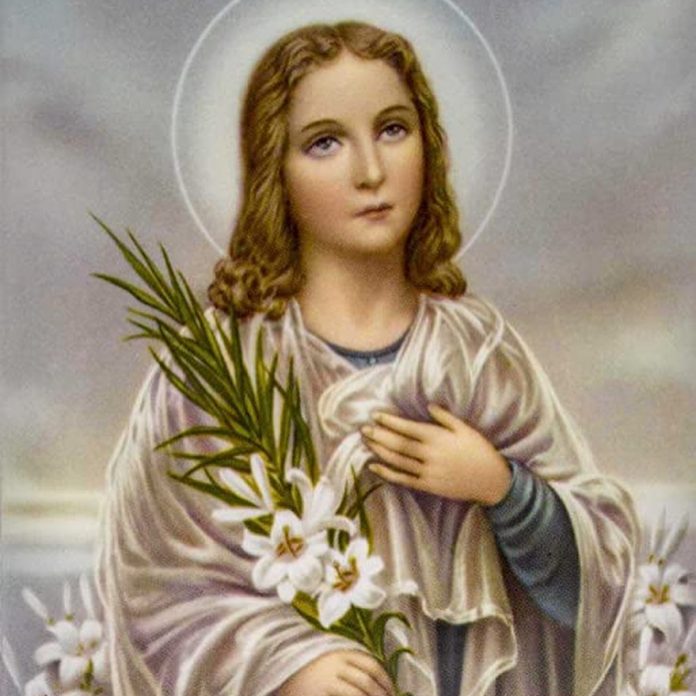 What does  holiness cost? Many times it is  our own life.  In our effort to   flee from sin, perhaps no doors would be  opened before  us.  Is it an excuse to  compromise with sin citing ‘compelling  circumstances’?  As for a  Christian, there is only  one option and  it is   standing against  sin.  Jesus taught us  that if one’s  hand or foot causes him to stumble,  it is better for him  to cut it off and throw it away so as to  enter  life  though  maimed or lame.  Simple reason also tells us  that entering  eternal  life  maimed or lame is better than  going  into   the  lake of fire with  all  our organs intact. If  your eyes tempt you to  sin, Jesus has only one  remedy to prescribe.  Tear it out  and  throw it away!  Our Lord was  more  concerned about  eternal life.  In fact he  did not  care about  anything  else during his public ministry.

Maria had to  suffer a  cruel death at the hands of  Alessandro, her neighbor. It was  in 1902, some  fifteen years before  Our Lady appeared at Fatima and  lamented about those innumerable souls going to hell  because  of the  sins of  the flesh, that  this  eleven year old girl had the  guts to forfeit  her  life in this world  so as to  get it back in eternity. Even in the moments just  before  her death, Maria’s concern   was   about  the  fate  of Alessandro. She was determined   that  she should  enter  the  gates of  paradise  undefiled.  She was  equally  determined  that  her  abuser  too should be there in heaven  with her.  This zeal for the  salvation of  a sinner who brought her  untold hardships is what makes the  life of  Maria different.  It is not  out of place to  infer that  Our Lady had the  wish of  Maria in her  mind while appearing at   Fatima, where she  stressed on  the  importance of  keeping the  virtue of  chastity.

Maria was born into a peasant family as the third among  six children on  16 October 1890.  At that time  their family was  living in  Corinaldo, a small  village in  the Ancona province of Italy.  Her  father succumbed to  malaria when she was  nine.  Even while  going through  difficult   times, her  family never compromised   on  faith.  Whenever time permitted, Maria used to  visit the  church of Our Lady of Grace situated in a neighboring village. Maria could not  afford to  spare the little amount  required to offer a  Holy Mass for her  departed  father.  Instead, she  made it  a habit to  offer a rosary every  day for the  repose of his soul.

Her mother  Assunta  took over the family  business of  sharecropping  which yielded  just what  was required  to  make  both ends meet.  They were cultivating the  land of a  local landlord and their partner in  farming was  Giovanni Serenelli, who  was  clever enough to  take  the lion’s share of what their   combined  efforts  fetched. His son, Alessandro was no better. His mind was  tuned to evil and  at every  possible  instance he used to  approach  Maria inviting  her to sin. Brought up as a devout  cathoic, Maria would tremble at this. She never submitted herself to anything  bad,  and   enjoying  the fruits of sin was unthinkable for  her . Though worried about the  frequent advances of  Alessandro, she was  more  concerned about  her family.  Because of this  reason, she did not tell anything about   Alessandro to her mother.

On the  fateful day of  5 July 1902, Maria was  sitting in front of her  little house and mending old clothes.  Her  siblings  and mother were  away  working in the  field. Her younger sister was  sleeping inside. Alessandro was  waiting  for such an opportune moment. He  approached Maria and  forcibly took her to the  bedroom.  He wanted  her to  submit to his  sinful  wishes. Maria resisted all his attempts telling that  it would be a sin and warned that  he would go to hell. Alessandro  persisted in his demand and threatened  Maria with all his force. But  Maria seemed unruffled. She would  die  a virgin  rather than  defiling  her  soul with the  stain of a mortal sin. Enraged, Alessandro drew a knife and brutally stabbed  the little girl  eleven times. When she tried to run towards the  door in an attempt to   escape, Alessandro stabbed her  three more times.

It was  the beginning  of horrendous pain and suffering for Maria  that lasted  another twenty hours.  With fourteen deep wounds that lacerated her lungs, heart, intestine  and other  vital  organs, Maria entered  her  ‘way of the  cross’. When  she was rushed to the  hospital,  doctors suggested an emergency  surgery as a last  resort to  save  her life. Little Maria  had to undergo   it without anesthesia. It added to her  pain and  suffering.

Midway through the  procedure, the  surgeon lost  hope and with a deep sigh, he  asked Maria; “Once you are in heaven, will you pray for me?” Maria replied with all her innocence; “But who is going to heaven first?” The surgeon replied with  a sad look; “It is you, Maria.”  She promised that  she will pray for the   surgeon from heaven.  Moments  before  her death she was  confronted with the most difficult question of her life. “Will you forgive Alessandro?”  Maria did not  hesitate even for a  moment to  reply. “For the love of  Jesus, I forgive Alessandro. And I want him to be  with me in heaven.”

It was   getting late   and angels were waiting  impatiently  for  her sacrifice to be completed. On 6 July 1902, she left  for  her  heavenly abode looking at an  image  of  the Blessed Virgin   and holding a  crucifix  tightly in her hands.  She was  only eleven years and  eight months,  but the  way she  faced  death serenely   was beyond what  we  expect  from  a girl of that age.

Maria  continued to   pray for the  conversion of Alessandro, this  time from heaven. But  it did not yield any immediate results.   That man was stubborn as  usual, and  he did not  show even  a remote  sense of remorse  for the  heinous crime he committed.  He was  sentenced to a prison  term of  thirty years. In the eleventh year of his  imprisonment, he had a  strange dream. He was   standing  in a beautiful garden of  lilies.  There, a  girl was  plucking  flowers. Alessandro  immediately recognised  the  girl. It was Maria whom his knife  pierced  fourteen times. She   gave  him a bunch of  lilies and  encouraged  him to accept it. When the  flowers touched his hands, he felt as if a   burning flame was placed on his  hand.  Alesandro  woke up as a  new man.  His  conversion was  complete.

Alessandro was  released after  28 years in  prison. His first  visit was  to  Assunta, Maria’s mother.  He asked  pardon from  her, unsure  of how  she would respond. But she was the mother of  Maria, who  with  all her  heart  forgave  the person who  abused and   stabbed her brutally.  Assunta forgave Alessandro telling   how she could   deny  pardon  to him when  her  daughter  had no problem in forgiving  him.  For the  next  four decades, Alessandro  lived a  life  of penance working as a gardener in a Capuchin Friars House as a lay member.

Forty eight years into  the heroic act of sacrificing  her  life  for  defending the virtue of  chastity,  Pope Pius XII elevated Maria Goretti to the  league of  saints. Her canonization was on the  twenty fourth of  June 1950  and she was   the  youngest person in  the history of the Church to be  declared a saint.  Her  canonization   ceremony was  noteworthy for many  reasons. Though   frail and weak, Maria’s mother Assunta was present there, becoming the   first  mother  to  have witnessed the   canonization of  her daughter.  As for the  crowd that  assembled at  Rome to witness the ceremony, conservative estimates put the figure somewhere around half a million, a  record in the history of the  Catholic Church.  Alessandro was part of the  crowd and  was  watching the  proceedings from a  distance. Considering the large number of   people eager to  have a glimpse of the proceedings, the   ceremony  originally  fixed at  St Peter’s Basilica had to be  moved to  the  more spacious St Peter’s Square.

It has been a century and  two decades since  Maria Goretti laid down her life to   procure a  rewarding  life after death. Her life should inspire us  and ignite in our  hearts an ardent  desire to  keep our bodies  pure. We are living in an age where  sins against  sixth and  ninth commandments  have  multiplied in  number and gravity. Impurity has swallowed our generation like  a flood.  Chastity is something  that   many  in the  world mock.  In a society, where any  kind of  abomination is  considered acceptable, the  relevance of  this little  girl  and the way in which  she  obeyed  the Word, least  fearing   a brutal death, need not be emphasised more.

‘For this is the will of God, your sanctification: that you abstain from fornication; that each one of you know how to control your own body in holiness and honor, not with lustful passion, like the Gentiles who do not know God; that no one wrong or exploit a brother or sister in this matter, because the Lord is an avenger in all these things, just as we have already told you beforehand and solemnly warned you. For God did not call us to impurity but in holiness (1 Thess 4:3-7)

Maria Goretti knew that  holiness was essential to enter   the  kingdom of  heaven.  Perhaps this  is one thing  that is  missing in our  generation. The media and entertainment industry have  sown the  seeds of impurity  among  our  children making the  lives of many, a repository  of  abominable things. Let us  bring  all such  lives  before the   infinite  mercy of   God  and pray for the intercession of  Maria Goretti.  May  Jesus Christ, who  was mocked, scourged and  crucified so that  we may inherit  eternal life,  cleanse all those  who are  entangled in the  web of   impurity.

Eleven years and  eight months is  but a small  period of time.  Most of  us who read this  will be   above  this age. For us, this  is  a time to introspect what we achieved  by living longer.  After all, we are  going to be  judged  not by the years we  lived on earth, but by the  deeds that  marked our  life.  Maria Goretti  has given us  a superb  example to affirm that   age is not a bar to please God.   Let us pray:

‘O Saint Maria Goretti who did not hesitate even at the age of eleven  to shed your blood and sacrifice life itself to defend your virginal purity, look graciously on the unhappy human race which has strayed away from the path of eternal salvation.

Teach us all, and especially our  youth, with what courage and promptitude we should flee for the love of Jesus anything that could offend Him or stain our souls with sin.

Obtain for us from our Lord victory in temptation, comfort in  sorrows, and the grace  to  live our life in holiness. May we one day enjoy with thee the imperishable glory of Heaven. Amen.’

LORD, TEACH US TO PRAY

Total Consecration to Jesus through Mary Day 24 of 33

Prayer To The Lord Jesus In Childlike Trust

Walking Through The Valley Of The Shadow Of Death