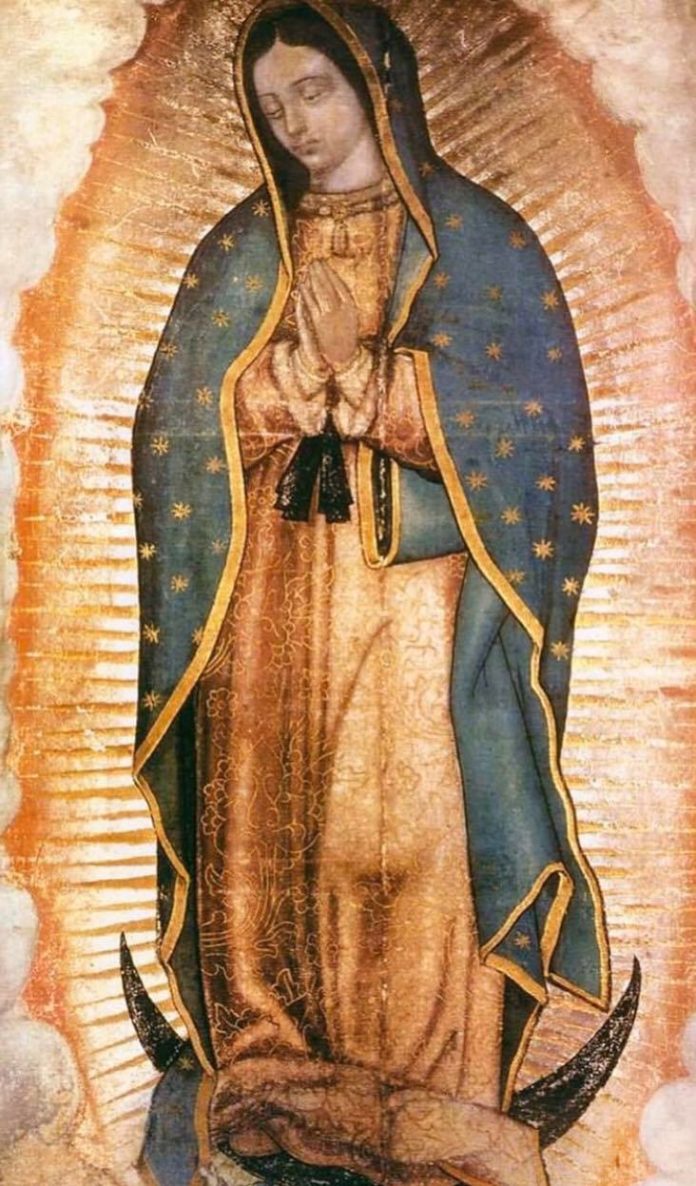 The story begins in the early morning hours of December 9, 1531, when a 57-year-old Indian peasant named Juan Diego was walking along the path of Tepeyac Hill on the outskirts of Mexico City. Keep in mind that only 10 years earlier, Hernando Cortez had conquered Mexico City. In 1523, Franciscan missionaries came evangelizing the Indian people. They were so successful that the Diocese of Mexico City was established in 1528. (Remember too that Jamestown, the first permanent English colony, was not established until 1607.) Juan Diego and many of his family members were among these early converts to the faith. He was baptized “Juan Diego” in 1525 along with his wife, Maria Lucia, and his uncle Juan Bernardino.

One must also not forget that Juan Diego had grown up under Aztec oppression. The Aztec religious practices, which included human sacrifice, play an interesting and integral role in this story. Every major Aztec city had a temple pyramid, about 100 feet high, on top of which was erected an altar. Upon this altar, the Aztec priests offered human sacrifice to their god Huitzilopochtli, called the “Lover of Hearts and Drinker of Blood,” by cutting out the beating hearts of their victims, usually adult men but often children. Considering that the Aztecs controlled 371 towns and the law required 1,000 human sacrifices for each town with a temple pyramid, over 50,000 human beings were sacrificed each year. Moreover, the early Mexican historian Ixtlilxochitl estimated that one out of every five children fell victim to this blood thirsty religion.

Our Lady of Guadalupe That morning Juan Diego was headed to Mass. As he walked along Tepeyac Hill, he began to hear beautiful strains of music, and he saw a beautiful lady, who called his name: “Juanito, Juan Dieguito.” He approached, and she said, “Know for certain, least of my sons, that I am the perfect and perpetual Virgin Mary, Mother of Jesus, the true God, through whom everything lives, the Lord of all things near and far, the Master of Heaven and earth. It is my earnest wish that a temple be built here to my honor. Here I will demonstrate, I will manifest, I will give all my love, my compassion, my help and my protection to the people. I am your merciful mother, the merciful mother of all of you who live united in this land, and of all mankind, of all those who love me, of those who cry to me, of those who seek me, and of those who have confidence in me. Here I will hear their weeping, their sorrow, and will remedy and alleviate all their multiple sufferings, necessities, and misfortunes.”

She told Juan Diego to go tell Bishop Zumarraga of her desire for a church to be built at the site. Tradition holds that Juan Diego asked our Blessed Mother her name. She responded in his native language of Nahuatl, “Tlecuatlecupe,” which means “the one who crushes the head of the serpent” (a clear reference to Genesis 3:15 and perhaps to the prominent symbol of the Aztec religion). “Tlecuatlecupe” when correctly pronounced, sounds remarkably similar to “Guadalupe.” Consequently, when Juan Diego told Bishop Zumarraga her name in his native tongue, he probably confused it with the familiar Spanish name “Guadalupe,” a city with a prominent Marian shrine.

Bishop Zumarraga was a saintly man, very just and compassionate. He built the first hospital, library and university in the Americas. He also was the Protector of the Indians, entrusted by Emperor Charles V to enforce his decree issued in August 1530, stating, “No person shall dare to make a single Indian a slave whether in war or in peace. Whether by barter, by purchase, by trade, or on any other pretext or cause whatever.” (Note that in 1537 Pope Paul III condemned and forbade the enslavement of the Native American Indian.) However, Bishop Zumarraga listened patiently to Juan Diego, and said he would reflect on the matter, understandably doubting such a story.

Our Lady of Guadalupe Juan Diego went back to Tepeyac and reported the bishop’s response. Mary instructed him to try again. So the next day, he did. Although this time it was more difficult to see the bishop, Juan Diego prevailed, and the bishop once more listened patiently. However, the bishop asked him to bring back a sign from Mary to prove the story. Again, Juan Diego reported the matter to our Blessed Mother, who told him to return the next day to receive “the sign” for the bishop.

On December 11, Juan Diego spent the day caring for his very sick uncle, Juan Bernardino. He asked Juan Diego to go and bring a priest who would hear his confession and administer the last rites. On December 12, Juan Diego set out again, but avoided Tepeyac Hill because he was ashamed that he had not returned the previous day as our Blessed Mother had requested. While making his detour, the Blessed Mother stopped him and said, “Hear and let it penetrate into your heart, my dear little son: let nothing discourage you, nothing depress you. Let nothing alter your heart or your countenance. Also, do not fear any illness or vexation, anxiety or pain. Am I not here who am your mother? Are you not under my shadow and protection? Am I not your fountain of life? Are you not in the folds of my mantle, in the crossing of my arms? Is there anything else that you need?” Mary reassured Juan Diego that his uncle would not die; in fact, his health had been restored.

As for the sign for the bishop, Mary told Juan Diego to go to the top of the mountain and pick some flowers. He went up to the hill which was dry and barren a place for cactus and found roses like those grown in Castille, but foreign to Mexico. He gathered them in his tilma, a garment like a poncho. He brought them to Mary who arranged them and said to take them to the bishop.

Juan Diego proceeded again to Bishop Zumarraga’s house. After waiting a while for an audience, he repeated the message to the bishop and opened his tilma to present the roses. The bishop saw not only the beautiful flowers but also the beautiful image of Our Lady of Guadalupe. Bishop Zumarraga wept at the sight of the Blessed Mother and asked forgiveness for doubting. He took the tilma and laid it at the altar in his chapel. By Christmas of that year, an adobe structure was built atop Tepeyac Hill in honor of our Blessed Mother, Our Lady of Guadalupe, and it was dedicated on December 26, 1531.

So from far and wide the natives came to see the miraculous Image. And Juan Diego became a preacher. He was one of their own, one they could trust, and, with his characteristic intensity, he told his people about the Virgin and about her Son who died for them. He did not have to traverse mountains and valleys to reach the unreachable as the good friars did; no, he just stood at his post and souls came to him, I should say they came to see their Mother, the most pure Lady. Like Caesar, they came, they saw; but unlike Caesar, they were conquered. Our Lady of Guadalupe and Juan Diego conquered them. In fact, there was hardly a native who approached the priests for Baptism in those early years who had not first been evangelized by the custodian at the shrine.

By 1541, just ten years after the apparitions, there were ten million Indians who had been converted from paganism.

Today, Juan Diego’s tilma is Mexico’s most popular religious symbol. Unlike any painting, it shows no sketching, or any sign of outline drawn to permit an artist to produce it. The very method to produce it is still not known. It can be seen today in a large basilica built to house up to 10,000 people.

Every artist who has examined the tilma has affirmed that there simply is no way short of a miracle for such an exquisite picture to have been painted on such a coarse and porous surface. Furthermore, the tilma itself, made from cactus fibers, should have fallen apart, naturally speaking, twenty or thirty years at most after it was made. Nevertheless, long defying the laws of decomposition, it hangs together to this very day. Needless to say, if the canvas has been miraculously preserved, so has the image. The colors are still as fresh and vivid as when they first appeared, despite the natural corroding effect of black smoke, which for a century arose before it from hundreds of burning vigil lights (it wasn’t until 1647 that the precious relic was put under glass), and despite the accidental spilling of a bottle of nitric acid across its surface by a workman in 1791.

Every year up to twenty million pilgrims come to Mexico’s capital from all over the world to see and pray to Our Lady before her miraculous picture. Her shrine attracts every type of visitor imaginable, from chest-beating penitents to cold sophisticated worldlings; from irreverent gum smackers in tight jeans to the simple ordinary worshiper. They all come, representing a vast cross-section of humanity, all the time, in a never-ending stream. Some approach for hundreds of yards on their knees with arms outstretched in a posture of penance. Others, who have not such a visible conviction, at least come in prayer, perhaps reciting the Rosary, to prepare for their climactic encounter. Too many, sad to say, approach as mere tourists with no faith and no love, like orphans who do not want a mother. But here Our Lady has made herself available to all, the just and the unjust, to be loved or just viewed. And isn’t it beautiful that she is always there, faithful to her promise to her “dear little one,” Juan Diego, even after four and a half centuries.

Guadalupe is the most frequented Marian shrine in the whole world. The Blessed Virgin receives here three times more pilgrims than she does even at Lourdes. Is it because of the cures? No…. There are cures, but that isn’t why so many are drawn here. There’s another reason, a more wonderful one, that gives Guadalupe such a compelling magnetism. It is the sense of Our Lady’s presence.

December 9 marks the feast day of Saint Juan Diego and December 12, the feast of Our Lady of Guadalupe. 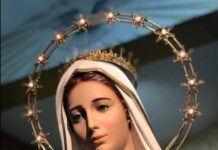 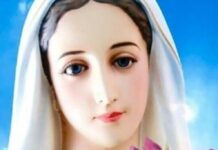 Prayer To Saint Joseph To Obtain A Conversion

Daily Consecration To Our Heavenly Mother

Marian Apparitions of our Lady in Kibeho 1981 Rwanda