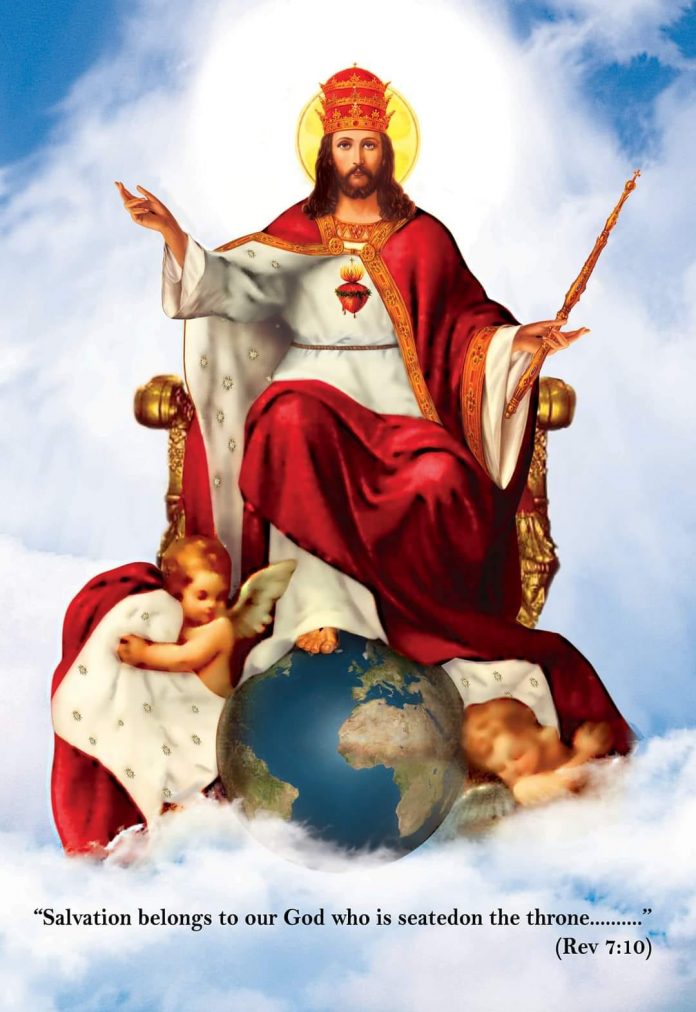 ‘Thy Kingdom  come’ has always been our prayer. Kingdom needs a king and when we say of the Lord’s kingdom, it is one where Jesus Christ reigns. We know that  we will get perfect peace, comfort, security, and  joy in a kingdom established under the reign of   the Lord only.  The Kingdom of  heaven is the Kingdom of Christ. We heard about the  kingship of  Jesus from the  lips of Pontius Pilate. And it was serious enough to award him a most cruel death on cross.

His title as king of Jews accompanied him through  his  final hours on this  earth. It was beneath the shadow of  what  Pilate wrote  for  him –  Iesus Nazarenus Rex Iudaeorum – that Jesus uttered his  last words; “Father, into your hands I commend my spirit.” Though the Jews  tried their best to get the inscription  altered to  reflect their  version about the kingship of Jesus,  Pilate stood his ground. Because it was true; Jesus was  king.

But we know that  Jesus is the king of all human beings, Jews and  gentiles alike.  When his birth was announced to the shepherds, the angel confirmed this universal  role  for which   Jesus came to  this  world. ‘I am bringing you good news of great joy for all the people; to you is born this day in the city of David a Savior, who is the Messiah, the Lord’ (Lk 2:10-11). We remember this great  historical event at Christmas. And in Easter, we  remember the passion, crucifixion, death, and resurrection of  Jesus that  brought salvation to  each one of us. To commemorate the pouring down of the Holy Spirit upon us, so as to be with  us  till the  end of times, we  celebrate the feast of Pentecost.

Yet we do not find  the  kingship of  Jesus Christ  manifesting itself in  perfection. In spite of his  triumph over   all the  rulers and authorities (Col 2:15), we know that  the kingdom of Christ is still in a stage of progression. Of this the Church teaches; ‘Though already present in his Church, Christ’s reign is nevertheless yet to be fulfilled “with power and great glory’ by the King’s return to the earth. This reign is still under attack by the evil powers, even though they have been  defeated definitively by Christ’s Passover’ ( CCC 671).

We are looking forward to the day when the kingship of Christ is revealed  in its perfection. As we know it is going to  happen at  his glorious  second coming at the end of  times. As such we should celebrate   the feast of Christ the King not to commemorate  his first coming but in anticipation of his   second coming, when  God the Father  will ‘make his enemies  his footstool’ (Ps 110:1). In that  sense  the feast of the Reign of  Christ is the  greatest  occasion for  Christians  to celebrate.

His rule  happens when the  last enemy to be destroyed’ (1 Cor 15:26) is defeated for good. Then  the  saying that is written will be fulfilled: ‘Death has been swallowed up in victory’ (1 Cor. 15:54). Where Christ reigns, there is no place for any other authorities. The Apostle says: ‘Then comes the end, when he hands over the kingdom to God the Father, after he has destroyed every ruler  and every authority and  power’ (1 Cor 15:24). This is the  interpretation for  us to  grasp it  with our  limited human understanding. The truth is that  the kingship of Jesus   transcends  time and space, the only  dimensions  we know. Paul says; ‘For in him all things in heaven and on earth  were created, things visible and invisible, whether thrones or dominions or rulers or powers- all things have been created through him and for him’ (Col 1:16). But we mortals see only a part of  Jesus’ personality. It is the period of  his earthly life, when he  ‘did not regard  equality with  God as something to be exploited, but emptied himself taking the form of a slave and  born in human likeness’ (Phil 2:7). The period  before his birth is  obscured from our eyes. As for the period after  his ascension, we know it partially in Spirit and look forward to knowing it fully in future.

If we  know the  greatness of our Lord’s name, we will get an idea about  the subtle perfection and  exalted nature of his  kingship. If ‘at the name of Jesus, every knee should bend, in heaven and on earth and under the earth’ (Phil 2:10), then think about the greatness of  that kingdom where the owner of this  exalted name reigns. Think how blessed are we  who are  called to be the subjects of this eternal kingdom. Also think  how unfortunate are those who, though invited,  refuse  it!

Only three disciples  got the  rare opportunity to witness  Jesus in glory. At the sight of the  king of glory  clothed in dazzling white, Peter says; “Lord, it is good  for us to be here” (Mt 17:4). The memories of what he saw on the mountain  did not fade from his mind even after decades, though  he could thereafter, see the Risen Lord from  close quarters for many days. He writes:‘…. We were with him on the holy mountain’ (2 Peter  1:18). Peter  exhorts us  to  lead a life of   holiness and godliness, waiting for and hastening the  coming of the day  of God’ ( 2  Pet 3:12). Any person who, like Peter, got a glimpse of  the glory of  Christ, will definitely pray for  hastening the  day of the Lord.

Of that kingdom and  life in it the prophet says; ‘ And the Lord will become king over all the earth; on that day the Lord will be one and his name one’ (Zech 14:9). We are the people  who are  being prepared for that day, and this is the time for us to prepare.  ‘Put to death, therefore, whatever in you is earthly: fornication, impurity, passion, evil desire, and greed( which is idolatry)…….. get rid of all such things – anger, wrath,malice, slander, and abusive  language  …….’ ( Col 3:5-8).

Every empire that the world has witnessed had its own  limitations. But the  empire of  Jesus knows no limits. Because  the  Father ‘ has  given him authority over all  people’ (Jn 17:2). The problem is that we do not recognize this all-encompassing authority of Jesus. It is the tragedy of those  who  give  themselves for the enchantment of the ‘ruler of this world’ (Jn 14:30). To aggravate things, we are fast entering  a period when the ‘lawless one, the one destined for destruction’ ( 2 Thes 2:3) will declare that  he is  in command of everything here on earth (Rev 13:7). But his  reign, like any other earthly kingdom in the past, will be limited in time. On the other hand, we  the believers are   waiting  for the establishment of  the eternal kingdom of  Jesus Christ. And we  look forward  to the citizenship of a  kingdom which has  no parallel in history.

So let us  pray with a pure conscience and sure hope: Thy kingdom come. And forget not to   keep the white robe of  holiness and  grace  when the king  comes to  meet his guests. Let us pray; Maranatha, Come Lord.

Prayer To Our Lady Of Perpetual Help For The Conversion Of...

Litany Of The Lost

A Prayer Of Reparation To The Most Holy Eucharist

In The Shadow Of The Almighty