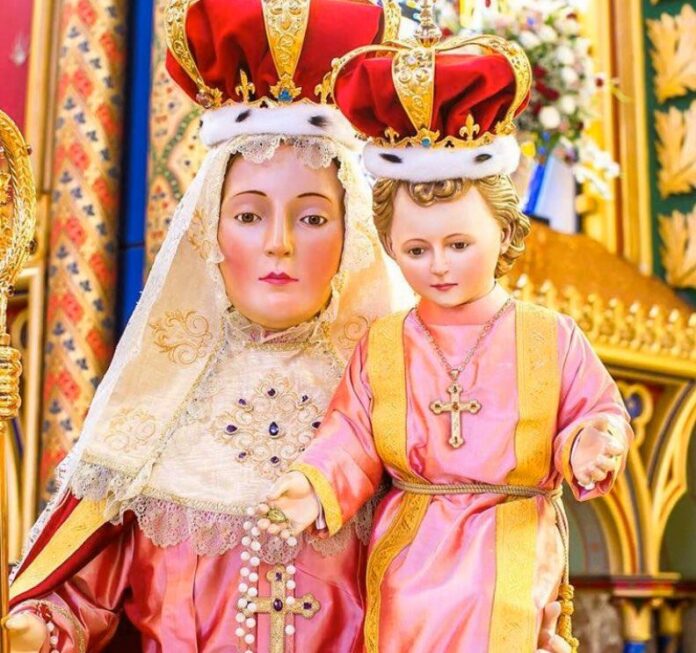 She is talking from behind centuries.  But the message is for our  times.  Every word spoken by  our Mother at Quito in Ecuador  in the early seventeenth  century is worth reading over and over again. Because they are  prophecies  about  how the world is going to be transformed into a cesspool of sin and its stench permeates even those holy places which were considered indomitable in the past.

Sr Mariana de Jesus Torres (Mother Mariana), a poor Spanish nun was awestruck by the  vivid  description Our Lady gave her, of a  world gradually  plunging into darkness.  When  Our Lady of Good Success appeared to her, everything seemed to be moving smoothly. Church was  vibrant with faith.  The  earlier centuries  had produced  great saints and  doctors of the  Church. Dogma was  dogma and the  Church never wavered  even in the face of  the possibility of grave schisms leading to an  unavoidable    split.  The Church was the  torchbearer of morality and virtues.  The  secular world outside  too, somehow  seemed to be in equilibrium with its own checks and balances. Even  in things secular, moral principles were  recommended, though not everyone complied with them.

Everything was going to change. That was the  message Our Lady gave  Sr Mariana.  It is not possible to  discuss all those  messages in a small article like this. So we will   go through only a few among them.  Before proceeding further, I should warn you that  any person reading the  messages of Quito might  be  confused to see certain  words or phrases that were not in practice in  early seventeenth century. For example, the messages as  available to  us today speaks of a  takeover of the Church’s control  by freemasons. We know that   free masonary was instituted as an organisation in 1717 only.  Then how did a message received  in 1610 contain this word?

The answer lies in the fact that  the first compilation of  the messages  received by  Sr Mariana from  Our Lady of Good Success was done as late as  1790, i.e a clean 180 years after the apparitions happened.  Tradition has it that Sr Mariana appeared to  Fr Manuel Sousa Peirrera almost 150 years after her death and  revealed those messages to him. Fr Peirrera in turn compiled them  for the benefit of the faithful. It doesn’t mean that  till then her messages were not heard of.  In fact as early as 2nd February 1611, a statue of Our Lady of  Good Success was  consecrated at the site of the apparition by the local bishop. Since then, the people of Quito celebrate her  feast on 2nd February, and the  tradition has been continuing  through the  past four  centuries. All bishops of the Arch Diocese of Quito have promoted  or  supported the devotion to  the Mother of God under the invocation of Our Lady of Good Success. In 1980 the Arch Bishop of Quito  appointed a commission  of priests to  study about the authenticity of the tradition with available resources and documents. One of the major sources they used was ‘The Admirable Life of Mother Mariana’ written by Fr  Manuel Sousa Peirrera in 1790. After detailed and meticulous examination of  all the resources and  documents  the  commission reported in 1985 that ‘they were authentic, not falsely introduced and worthy of credibility’.

As such we are convinced that  this book can be  trusted for  knowing everything about Mother Mariana, the apparition she had and  the messages received by her. Another  useful source  is the book ‘Prophetic Messages’ written by  Msgr Luis E Cadena, the postulator  for the  cause of beatification of Mother Mariana. It is understood that  the book bears  an  imprimatur of the Vicar General of the Arch Diocese.

Now let us have a quick look at what  our Mother  told:

-By the twentieth century there will be no innocence  in children and no modesty in women.

-Those who should speak  will fall silent

-Woe to children of those days

-All customs will be corrupted

-Almost no virgin souls will be found in the world

-It will be difficult to get  the sacraments of Baptism and Confirmation.

-Confession will become rare. It will be available in Catholic schools only.

-Public and  private sacrilege against the  Holy Eucharist will increase

-Consecrated Hosts will be stolen to  profane Eucharistic Species

-Extreme Unction will be little valued

-The sacrament of Matrimony will be  attacked and  deeply profaned

-Procreation of children outside wedlock will increase

-Secular education will increase  and  priestly and religious vocation will decrease

-They will scandalize the Christian people

-At the end of the nineteenth century and throughout a great part of the twentieth, many heresies will be propagated

-Lack of a Prelate and Father to watch over  the Church with paternal love, gentleness, strength and prudence

-Suffering to good pastors, good priests and the  Supreme Pastor and Vicar of Christ on earth, who, a prisoner  in  Vatican, will shed secret and bitter  tears.

-The small number of souls who will secretly safeguard the treasure of Faith and virtues will suffer a cruel, unspeakable, and long martyrdom.

-When everything seem to be lost and paralysed, then will begin the process of  complete  restoration.

Should the  list continue? I think what is already written is sufficient to convince even a non- believer about the veracity, authenticity  and urgency of the messages given by Our Lady at Quito. To those who still  doubt the messages, I would humbly redirect them to what our Mother said in  La Salette, Fatima and Lourdes or what saints like Francis  of Assissi and Don Bosco prophesied. They match  with these messages in most aspects. My request to the doubting Thomases is  to ignore their urge to  research the historical  authenticity of the apparitions or the   words used in the compilation. Just remember one thing. The apparition happened in  seventeenth century and the prophetic  messages were  treated with high esteem by the clergy and laity alike, the apparition was  approved by  the local bishop, it was documented in 1790 and  the tradition of devotion to  Our Lady of Good Success has been  continuing for  more than four centuries with an ecclesiastical stamp of  approval coming as late as the final decades of  twentieth century. Are they not sufficient   to   encourage us to take them seriously?

The times prophesied by our Mother is now upon us. We have witnessed a century outrightly sold to  sin and perversions. And the present one is no better. We  are going from  bad to worse  and the worst is soon to come. Or has it come already? Our Lady gives us messages not to scare us but to prepare her children  for the  eventual great showdown between the army of the devil and her own army  of which we are the frontline warriors. She has this final  message to us.

“Pray constantly, implore tirelessly, and weep bitter tears in the seclusion of your heart, beseeching the Eucharistic Heart of my most holy Son to take pity on His ministers and to end as soon as possible these unhappy times”. Our hope is that with the intercession  of  the Blessed Virgin ‘we shall overcome’ this unhappy times soon and come out victorious to step into the  place of perfect and unending happiness reserved for us.

May  Our Lady of Good Success lead us to victory under the banner  of  her Son’s cross.

Act of Consecration to the Blessed Sacrament – A Thursday Devotion