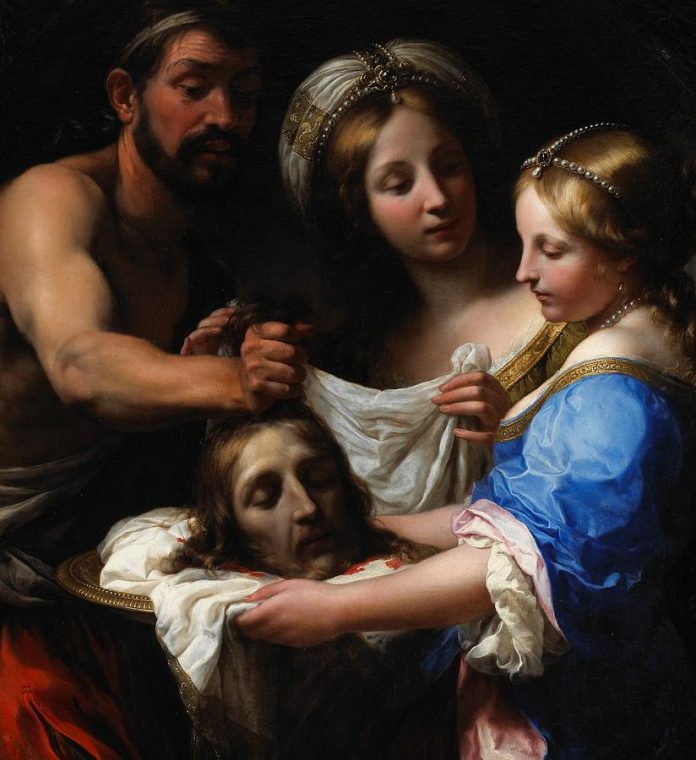 ‘As they went away, Jesus began to speak to the crowds about  John: “What did you go out into the  wilderness to look at? A reed shaken by the wind? What then did you go out to see? Someone dressed in soft robes?…… “( Mt 11:7-8).

John the Baptist was one  person  whom Jesus  praised the  most. His greatness can be   measured from the words of  Jesus that  among those born of women no one has arisen  greater than John the Baptist. Yet it should  not be  missed that  the  least in the  kingdom of heaven is greater than he. When we describe the  coming  kingdom as one that neither our  eyes have seen nor our ears have heard,  are we aware that  those who  try to enter it will be measured  by a difficult scale? The bliss of heaven is  something that  the  human heart has never experienced. Let us hope  that  we will be  treated   at least among  the  least in the kingdom. To be  counted  with  the  greats in heaven  was  a difficult  task  even by John’s  standard. Forget about the  seat  we are going to get in heaven; reaching there itself needs  enormous effort from our side. To gain entry into the kingdom of God, we must be vigorous, forceful and focused on  our  goal. In other words  only a  total commitment  will lead us to heaven.

John was  such a man. His life was  committed to  God and  God alone. The  crown of  first martyr in the  New Testament era  rightfully belongs to John. Not that  the   Holy Innocents were not martyrs.  They  were  murdered  not because of  anything  they did. They  died ‘instead’ of Jesus rather than ‘for’ Jesus.

What was the ‘offence’  committed by John the Baptist? It  was the very same   offence for which all other  martyrs   in history  also  were arraigned. It was   speaking the  truth!  John  knew that  his words  would  certainly offend the   king. It was not an excuse for John   to mince his  words for the  reason  that the  person at  the receiving end was the reigning  king.  His words were  sharper  than ax. With those words   he led  multitudes to repentance. With those words he called a  generation  that ‘conceived desire and gave birth  to  sin’, ‘brood of vipers’! Then, if they did not lay their  hands on him, it was because his words were strong enough  to  melt  their hardened hearts. Admittedly some among them  accused John who ‘came neither eating nor drinking’ as  possessed by  a demon. Yet they  acknowledged the  painful  truth that  they were  trees  that do not bear good fruit and that the ax was  already lying  at their root. This is the power of the Word.

The Jews had   accepted John as a prophet. Though a gentile by birth and  impious by nature, Herod also was convinced of the greatness of  John. But unlike the woman of Samaria, who accepted  the person who told her  ‘everything  she had ever done’,  Herod was intolerant to the extent that  he  imprisoned  John.  By  putting  John behind bars, Herod  increased the  number of his sins. But he did not dare to   execute  John fearing popular backlash, because the  people regarded John as a  prophet. Mark testifies that Herod  Protected  John the  Baptist upto a point. ‘Herod feared John, knowing that  he was a righteous and holy man and  he protected  him. When he heard him, he was  greatly perplexed, and yet  he liked to listen to him’ (Mk 6:20). Perhaps that king would have  consoled himself that   John would not open  his mouth against him from the  prison.

But on  the fateful day  of  a birthday bash that  he  celebrated with  wine and  variety entertainment programs  in the company of  distinguished guests, the same  Herod signed the  death warrant  of John, whom Jesus Christ  had certified  as the  greatest among mortals. John’s head that  never bowed before Herod, did not bow before Herodias either. With his blood spilled on the  floor of the prison and  then on the platter of the  king, John secured a place in heaven.

John’s  words and deeds were indeed a  reflection of    what the great prophet  Elijah  once did.  John’s zeal and  commitment to  God was  well evident  in everything he did.  True, it was  written: ‘At the appointed time, it is written, you are destined to  calm the wrath of God  before it breaks out in fury, to turn the  hearts of parents  to their children, and to restore the tribes of Jacob’ ( Sir 48:10). Elijah did come the  second time and  spoke the truth  though it was  not  pleasing to the  king and his  queen.

It was  a re-enactment of    what happened on the Mount of Carmel, where Elijah the lone  prophet of the True God stood  against  found hundred and fifty   prophets of Baal and another  four hundred  prophets of Asherah, who  ate at the table of   Jezebel  the queen. Once  his mission was   over, Elijah ascended into heaven in a chariot  of fire. But  John the Baptist secured  entry into heaven through  a fiery ordeal. Long periods of  prayer spent   in solitude was not the  only thing  common  to  them. Even the   dress  of these two persons who lived eight and a half centuries apart, were  similar!  ‘He said to them, “What sort of  man was he who  came to meet you  and told you these things?” They answered him, “A hairy man, with a leather belt around his waist”. He said, “It is Elijah the Tishbite” (2 Kings 1:7-8). And about   John it is written: ‘ Now John wore clothing of camel’s hair with a leather belt around his waist…’ ( Mt 3:4).

Their missions were also  similar; to  prepare the way of the  Lord! To be precise, John was  sent to   prepare the   people  for welcoming the   Messiah, which he  accomplished in style.  But he never claimed any  credit  for what  he did. He was  deeply convinced that   he  was  but the ‘voice of the  one crying out in wilderness’  to prepare the way of the Lord and to make his paths straight. He was  also convinced that the   one who is more powerful was coming after him and that  he was not worthy to  carry  the sandals of  Jesus.   This sense of  deep humility  reverberated in  his  declaration: “He must increase, but I must  decrease”.

We are  accustomed to a generation  where Jesus Christ decreases  in direct proportion to  the  increase in  our desire to   enjoy life the way we like. Preachers whose  primary aim  is money are commonplace. Against the backdrop of  this quest for money and worldly pleasures, how many  among us  are  ready to  humble ourselves for  Jesus  Christ is the  pertinent question. This  question assumes more importance  in the  context of our   duty  to prepare the  way for the  second coming of Jesus Christ in glory, just like  John the Baptist prepared  his  way  when  he came first.

‘ Which of the  prophets did your ancestors not persecute? They killed those who  foretold the coming of the  Righteous One’ (Acts 4:52). This is not  about  something that happened in    the distant past.  This is  also  something to be fulfilled before the  second coming of  Jesus Christ, the Righteous One. Yes, this is the  time  when thousands of   saints will rise  from our ranks. The  world  badly needs saints in these end times. The  world  needs them  to  give testimony to truth, to proclaim the return of Jesus  Christ the  just judge,  and to  oppose evil in all its forms.  The  world is looking for  those saints who will stand in faith steadfastly with  their heads high in the face of  persecution, and who will  be  ready to   sacrifice their life at the moment when the race   assigned to them by  the Lord is completed. And their blood will not  go in vain.  Their souls will  be safe in the  hands of  God. ‘I saw under the  altar the souls of those who had been slaughtered for the word of God and for the  testimony they had given’ (Rev: 6:9). Surely God will  avenge their blood  on the inhabitants of the earth. It is  written: “They were each given a white robe and told to rest a little longer, until the  number would be complete both of their fellow servants  and  of their brothers and sisters  who were soon  to be killed  as they themselves had been killed’ (Rev 6:11).

As the  martyrs rest  in expectation, they look at us for completing their  number. They invite us to  follow them  in martyrdom. Remember that the  revenge on the  inhabitants of the  earth is postponed  until the required  number of   martyrs  rise  from our ranks. In this run up to  martyrdom let  us ask the intercession of  St John the Baptist and  pray:

You raised up St. John the Baptist

to prepare the way for Christ.

We call upon St. John’s intercession

to properly prepare us with  faith and  true

repentance to receive Your

Make us faithful to Truth and Justice,

as You did to Your servant,

John the Baptist, herald of Your Son’s

birth. O Lord, increase Your life within us. 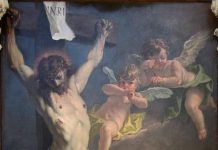 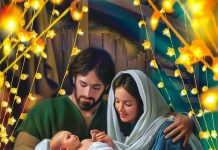 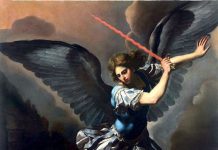 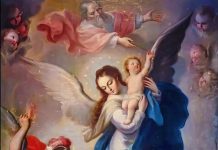 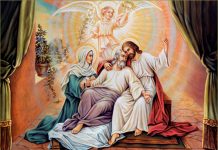 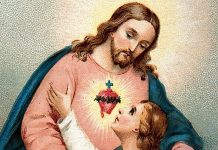 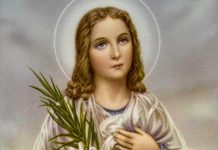 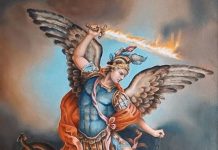 A Healing Prayer Of Surrender

Consecration To The Precious Blood Of Jesus Christ

Protection against the epidemic by the Miraculous Medal

Do Whatever He Tells You