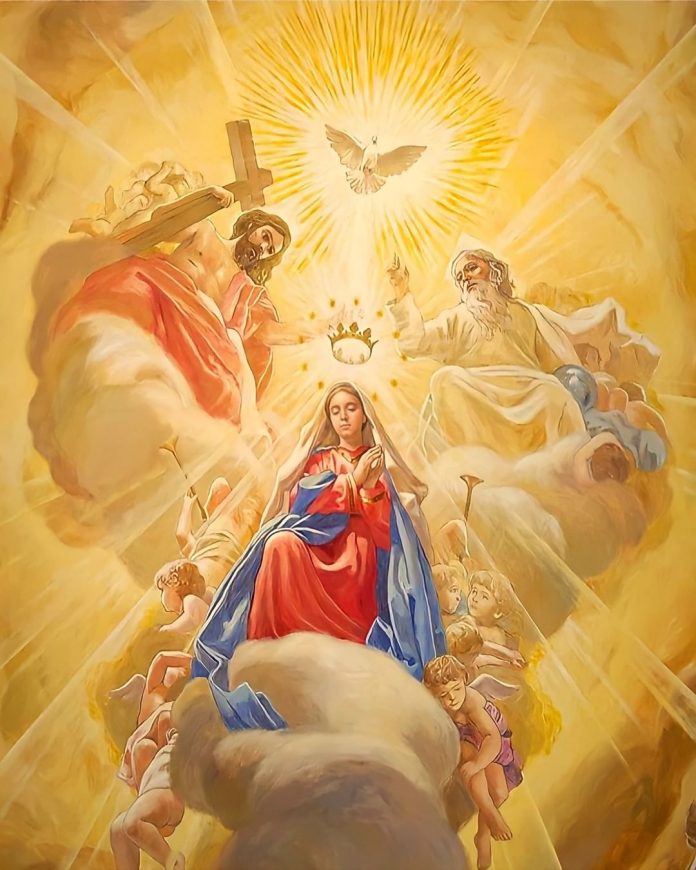 Assumption of Mary into heaven is  a dogma  defined by the Catholic Church. The  belief in the assumption of the Blessed Virgin was present  in the  Church from   early  centuries. John Damascene (675–749) records that  during the Chalcedon Council (AD 451), the Bishop  of Jerusalem, while  replying to an enquiry from the emperor  Marcian about the body of the  Mother of God, stated that ‘Mary died in the presence of all the Apostles, but that her tomb, when opened upon the request of St. Thomas, was found empty; wherefrom the Apostles concluded that the body was taken up to heaven’.

Centuries later, the Church  declared the  assumption of Mary as a  dogma.  The fact is that the Church could not  have drawn any other  conclusion  from the vast   volume of theological  evidence and  references to  tradition – both in the Catholic and Orthodox churches – about the assumption of  the Mother of God. Even before the  belief was  raised to the status of a properly defined dogma, the presumption about assumption was  well recorded.

Mary’s life  deserved nothing less than a crown in heaven, that too immediately after the  conclusion of her earthly life. She was immaculate in birth, life, and death. Why should her soul wait further to enter  its final destination and why should her    body undergo the  natural process of decay?

Doubts still remain, some might argue! How is it possible that  a mortal is raised to heaven defying  the laws of nature? Elijah will answer them.

‘As they (Elijah and Elisha) continued walking and talking, a chariot of fire separated the two of them, and Elijah ascended in a whirlwind into heaven’ (2 Kings 2:11). If it happens today, we will doubt it. We will find some  scientific reasons behind  the ‘optical illusion’ of Elisha to explain what he experienced. But back then, the  people were not so sophisticated, and were ready to believe that  miracles do  happen.  While  Elisha was  accompanying  Elijah in  Bethel, the prophets there asked  him; “Do you know that  today the Lord will take your master away from you?” And he said, “Yes, I know; keep silent” (2 Kings 2:3). This question was  repeated at Jericho too and  Elisha gave the same  answer.  Neither the prophets nor  Elisha were skeptic about the  possibility of  God taking a man into heaven. Because  they knew about an earlier incident  when  a man who walked with God was taken  by God into heaven; ‘Enoch walked with God; then he was no more, because God took him’ (Gen 5:24).

If it is possible for  mortals like Elijah and Enoch to be  given  such an enviable ending to their  earthly life, how much more the Blessed Virgin, being immaculate, should be entitled to be assumed into heaven? What I would like to remind  the skeptics is that  the   assumption of   Mary is  not a mere  presumption, but one well founded on  Biblical verses.

But for us, the  children of Mary,  we do not  need any  empirical evidence  to  convince ourselves that our Mother was  assumed into heaven. For us, she is the ‘Ark of God’s covenant’ placed in  God’s temple in heaven.  ‘Then God’s temple in heaven was opened, and the ark of  his covenant was seen   within his temple; and there were flashes of  lightning, rumblings, peals of thunder, an earthquake, and heavy hail’ (Rev. 11:19). She is the  ‘woman clothed with  the sun’ (Rev. 12:1). Moon was  under her feet, and stars were her  crown. Such resplendence can be  from  heaven only. We do not need lengthy theological explanations to   believe that the Holy Mother was  assumed into heaven. We believe it. The church believed it.   ‘Munificentissimus Deus’,   the apostolic constitution  issued by Pope  Pius XII in 1950  was  a formal declaration of  what Christians believed for  nineteen centuries.

“Look today at your heavenly Mother, assumed to the glory of paradise, even with her body. Unite your-selves to the joy of all the angelic cohorts, of the saints, and of the souls who are still being purified in purgatory. Share also in the joy of the Church, pilgrim in the desert of the world and of history, which contemplates your heavenly Mother as a sign of consolation and sure hope. I am a sign of sure hope for the Church, as She walks toward’ (Message No 549- To the Priests, Our Lady’s Beloved Sons)

Looking towards this glorious  ‘sign of sure hope’,  let us rejoice in the  hope of  our own  entry into heaven, keeping in  mind how our  Holy Mother was  assumed into heaven. Let us also  try to  emulate those   heavenly virtues  with  which the Blessed Virgin adorned herself.

Prayer to Sacred Heart of Jesus on First Friday of the...