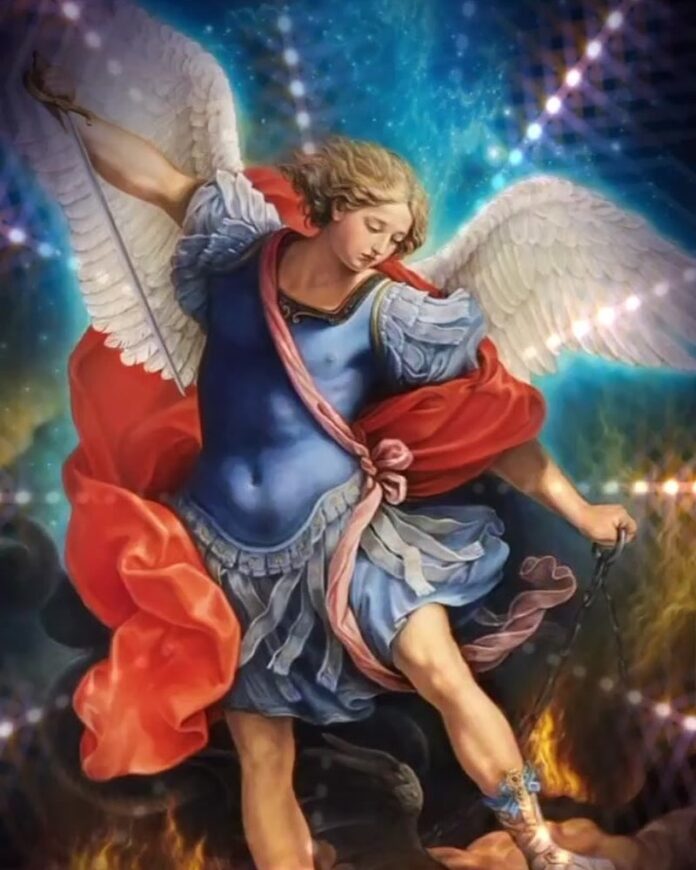 The greatest and most powerful of all God’s angels is Saint Michael. His name means “Who is like to God?” This was the challenge he issued to Lucifer when Lucifer offended God and was hurled by Saint Michael out of Heaven and into hell.

Saint Michael escorted the Blessed Virgin Mary into Heaven on the day of her Assumption. Saint Michael is the Guardian Angel of the Pope. He is the special protector of the Church. He is the special angel of the Blessed Sacrament. He leads the souls of the Just into Heaven when they die. He is invoked in the lovely prayer: “Holy Archangel Michael, defend us in the battle. Be our protection against the wickedness and snares of the devil….”

Saint Michael is invoked in all Masses for the dead, in the Offertory prayer. His name is mentioned in every solemn high Mass when the priest blesses the incense. He is the first one named after Our Lady in the Litany of the Saints. He is invoked in the prayer for the dying. Saint Michael has two feast days: one on May 8, to commemorate the dedication of a chapel to him at Monte Gargano in Italy, in 525, and one on September 29, to commemorate the dedication of the great church to him in Rome, in 530.

Saint Gregory the Great was the Pope specially devoted to Saint Michael. Saint Michael appeared to Saint Joan of Arc and helped her in her battle against the English. He also appeared in France, in Normandy, in 709. A beautiful shrine was built to him on a hill there, the still famous Mont Saint-Michel. Devotion to Saint Michael went over from Normandy to Ireland, to Scotland, where he has been greatly reverenced and loved.

PRAYER TO ST MICHAEL THE ARCHANGEL

O Glorious Archangel St. Michael, Prince of the heavenly host, be our defense in the terrible warfare which we carry on against principalities and powers, against the rulers of this world of darkness, and spirits of evil.

Come to the aid of man, whom God created immortal, made in His own image and likeness, and redeemed at a great price from the tyranny of the devil. Fight this day the battle of the Lord, together with the holy angels, as already thou hast fought the leader of the proud angels, Lucifer, and his apostate host, who were powerless to resist Thee, nor was there place for them any longer in heaven. That cruel, that ancient serpent, who is called the devil or Satan, who seduces the whole world, was cast into the abyss with his angels.

Behold, this primeval enemy and slayer of men has taken courage. Transformed into an angel of light, he wanders about with all the multitude of wicked spirits, invading the earth in order to blot out the name of God and of His Christ, to seize upon, slay and cast into eternal perdition souls destined for the crown of eternal glory. This wicked dragon pours out, as a most impure flood, the venom of his malice on men; his depraved mind, corrupt heart, his spirit of lying, impiety, blasphemy, his pestilential breath of impurity and of every vice and iniquity. These most crafty enemies have filled and inebriated with gall and bitterness the Church, the Spouse of the Immaculate Lamb, and have laid impious hands on her most sacred possessions. In the Holy Place itself, where has been set up the See of the most holy Peter and the Chair of Truth for the light of the world, they have raised the throne of their abominable impiety, with the iniquitous design that when the Pastor has been struck, the sheep may be scattered.

Arise then, O invincible Prince, bring help against the attacks of the lost spirits to the people of God, and give them the victory. They venerate Thee as their protector and patron; in Thee Holy Church glories as her defense against the malicious power of hell; to Thee has God entrusted the souls of men to be established in heavenly beatitude. Oh, pray to the God of peace that He may put Satan under our feet, so far conquered that he may no longer be able to hold men in captivity and harm the Church. Offer our prayers in the sight of the Most High, so that they may quickly conciliate the mercies of the Lord; and beating down the dragon, the ancient serpent who is the devil and Satan, do Thou again make him captive in the abyss, that he may no longer seduce the nations. Amen.

God, the Father of our Lord Jesus Christ, we call upon Thy holy name, and we humbly implore Thy clemency, that by the intercession of Mary, ever Virgin Immaculate and our Mother, and of the glorious Archangel St. Michael, Thou wouldst deign to help us against Satan and all other unclean spirits, who wander about the world for the injury of the human race and the ruin of souls.

One day, Saint Michael the Archangel appeared to Antonia d’Astonac, a most devout Servant of God and told her that he wished to be honoured by nine salutations corresponding to the nine Choirs of Angels, which should consist of one Our Father and three Hail Marys in honour of each of the Angelic Choirs.

“Whoever would practice this devotion in his honour would have, when approaching the Holy Table, an escort of nine angels chosen from each of the nine Choirs. In addition, for the daily recital of these nine salutations, he promised his continual assistance and that all the holy angels during life, and after death deliverance from Purgatory for themselves and all their relations.”

HOW TO PRAY THIS CHAPLET

The chaplet begins with the invocation on the medal. Then say one Our Father and three Hail Marys after each of the nine salutations in honor of the nine Choir of Angels as follows

Invocation on the Medal
O God, come to my assistance! O Lord, make haste to help me! Glory be to the Father……..etc.

First Salutation
By the intercession of St. Michael and the heavenly Choir of Seraphim, may it please God to make us worthy to receive into our hearts the fire of his perfect charity. Amen.
(1 Our Father and 3 Hail Marys)

Second Salutation
By the intercession of St. Michael and the heavenly Choir of Cherubim, may God in his good pleasure, grant us grace to abandon the ways of sin, and follow the path of Christian perfection. Amen.
(1 Our Father and 3 Hail Marys)

Third Salutation
By the intercession of St. Michael and the sacred Choir of Thrones, may it please God to infuse into our hearts the spirit of true and sincere humility. Amen.
(1 Our Father and 3 Hail Marys)

Fourth Salutation
By the intercession of St. Michael and the heavenly Choir of the Dominations, may it please God to grant us grace to have dominion over our senses, and to correct our depraved passions. Amen.
(1 Our Father and 3 Hail Marys)

Fifth Salutation
By the intercession of St. Michael and the heavenly Choir of the Powers, may God vouchsafe to keep our souls from the wiles and temptations of the devil. Amen.
(1 Our Father and 3 Hail Marys)

Sixth Salutation
By the intercession of St. Michael and the admirable heavenly Choir of the Virtues, may it please God to keep us from falling into temptation, and may He deliver us from evil. Amen.
(1 Our Father and 3 Hail Marys)

Seventh Salutation
By the intercession of St. Michael and the heavenly Choir of Principalities, may it please God to fill our souls with the spirit of true and sincere obedience. Amen.
(1 Our Father and 3 Hail Marys)

Eighth Salutation
By the intercession of St. Michael and the heavenly Choir of Archangels, may it please God to grant us the gift of perseverance in the faith, and in all good works, that we may be thereby enabled to attain the glory of paradise. Amen.
(1 Our Father and 3 Hail Marys)

Ninth Salutation
By the intercession of St. Michael and the heavenly Choir of all the Angels, may God vouchsafe to grant us their guardianship through this mortal life, and after death a happy entrance into the everlasting glory of heaven. Amen
(1 Our Father and 3 Hail Marys)

Say an Our Father on each of the four large concluding beads:
The first one to St. Michael,
The second one to St. Gabriel,
The third one to St. Raphael,
The fourth one to our Guardian Angel.

End this Chaplet with the following Anthem and prayer.

Anthem
Michael, glorious prince, chief and champion of the heavenly Host, guardian of the souls of men, conqueror of the rebel angels, steward of the palace of God under Jesus Christ, our worthy leader, endowed with superhuman excellence and virtues: vouchsafe to free us all from every ill, who with full confidence have recourse to thee; and by thy incomparable protection enable us to make progress every day in the faithful service of our God. V. Pray for us, most blessed Michael, Prince of the Church of Jesus Christ. R. That we may be made worthy of his promises.

Prayer
Almighty and Eternal God, who in thine own marvelous goodness and pity didst, for the common salvation of man, choose the glorious Archangel Michael to be the prince of the Church: make us worthy, we pray Thee, to be delivered by his beneficent protection from all our enemies, that, at the hour of our death, none of them may approach to harm us; rather do Thou vouchsafe unto us that by the same Archangel Michael, we may be introduced into the presence of thy most high and divine majesty. Through the merits of the same Jesus Christ our Lord. Amen. 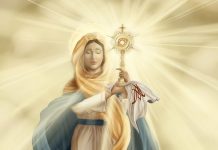 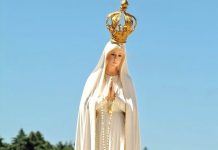 The 5 Prayers Revealed at Fatima that Every Catholic Should Know 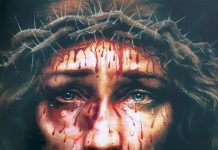 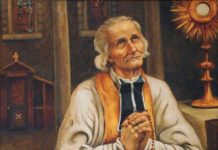 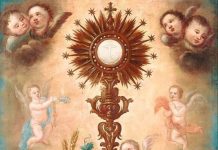 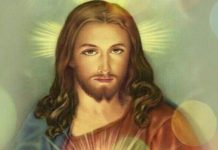 Act Of Consecration And Love Composed By St.Margaret Mary Alacoque (For The First Friday) 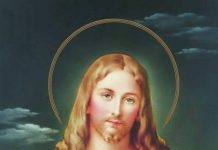 Consecration Of Family To The Sacred Heart Of Jesus 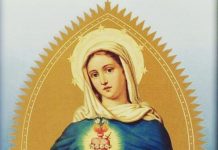 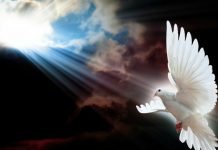 Novena to the The Holy Spirit: Day 9

Catholic Prophecies on the Loss of the Holy Eucharist

In What does Devotion to Our Lady Consist

Act of Consecration to the Blessed Sacrament – A Thursday Devotion

Sighing for the Holy Spirit