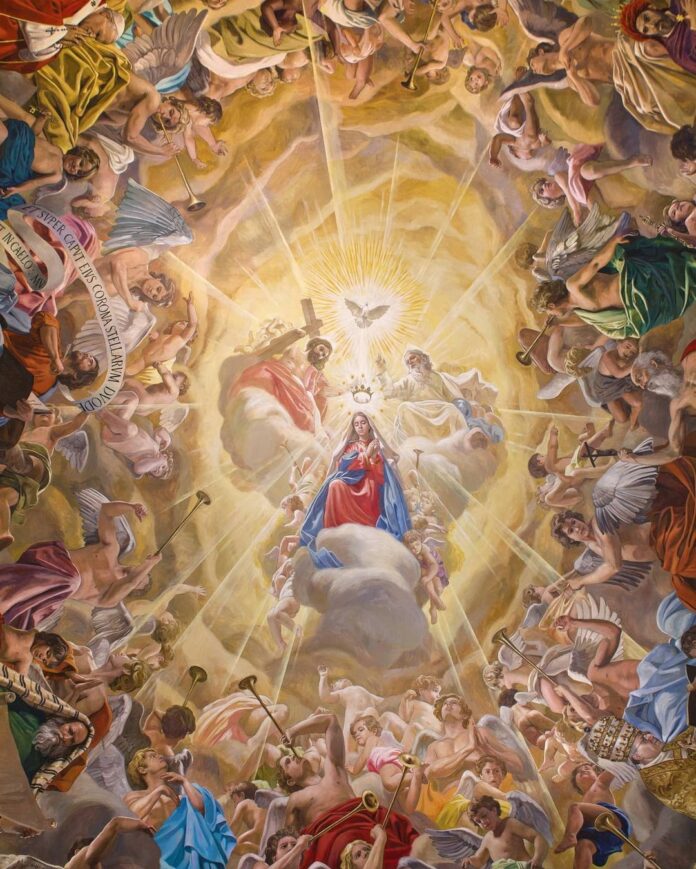 Heaven is open. Is it  difficult to believe? It is an absolute truth that  heaven is open.  Bible testifies; ‘Its gates will never be shut by  day- and there will be  no night there (Rev.21:25).  So it is ‘trustworthy and true’  that  heaven is open.  But are we able to  see it?  We are resigned to think that   a vision of heaven is  beyond the  capabilities of   this mortal body. It is true, but  what drives  us is  not flesh, but spirit. Spirit can  reach the  higher realms where flesh cannot enter.   ‘It is the spirit that  gives life; the flesh is useless’ ( John 6:63). Do you think that  with this  useless flesh the majesties of heaven  could be seen? Never.

But there are  men and women who saw  the heaven even while on earth. Today we will  direct our  thoughts to one such person.  Think of St Stephen, the first martyr. He was a  person filled with Spirit. ‘But they could not withstand the  wisdom and spirit with which he spoke’ (Acts 6:10). Such  was the anointment Stephen gained. ‘And all who sat in the council looked intently at him and they saw that his face was like the face of an angel’ (Acts 6:15). It was impossible for them to  agree with what was revealed  by the Holy Spirit through Stephen.  Scripture  admonishes them  in the harshest of words: “You stiff-necked people, uncircumcised in heart and ears, you are forever opposing the Holy Spirit, just as your ancestors  used to do” (Acts 7:51). A person   who is opposing the Holy Spirit can never have a true  god-experience.  In the end we see the Jews stoning  Stephen to death. Martyrdom is not an easy  thing, nor is it  granted at our will. It is a grace  and gift from  God.

Those who live under persecution and looking forward to the day of their martyrdom should read the  whole  of chapter 7 of the Acts, especially the last  few verses. It will  give them strength and  hope to  withstand till the very end. Those who tremble at the  thought of  having to suffer  for the sake of  Jesus Christ  should also read it, so that  they  will be   strengthened in  their faith. Those who think sacrificing one’s life for  upholding the true faith is  nonsense should certainly read it. They will realise what faith means, and  how  faith is witnessed in  martyrdom and how martyrs  are crowned in  heaven.  ‘Stephanos’ literally means a  crown or  a mark of royal or exalted rank.

We  cannot   read about the  final moments of  Stephen without amazement. It tells us  how  much God values martyrdom on earth. Let us read it  once:

“When they heard these things, they became enraged and ground their teeth at Stephen.  But filled with the Holy Spirit, he gazed into heaven  and saw the glory of God and Jesus standing at the right hand of God. “Look,” he said, “I see the heavens opened and the Son of Man standing at the right  hand of God!”  But they covered  their ears, and with a loud shout all rushed together against him.  Then they dragged him  out of the city and began to  stone him; and the witnesses laid their coats at the feet of  a  young man named Saul. While they were stoning Stephen, he prayed, “Lord Jesus, receive my spirit.” Then he knelt down and cried out in a loud voice, “Lord, do not hold this sin against them.” When he had said this, he died’. ( Acts 7:54-60).

It was during this  final trial surrounded by enemies on all sides and  while going through the most excruciating pain of being  stoned to death, that  Stephen raised his  eyes upwards to gaze into heaven. At that  moment he saw the  heaven open. He could see the glory of  God, the majesty of  heaven and  his  Lord and Saviour  standing next to the Father. He gave his final testimony  to what he saw there. This glimpse of heaven  was sufficient reason for Stephen to utter his  final words. Like his Master who prayed for those  who crucified him, Stephen also  commend his soul to the Lord with a prayer to forgive his persecutors.

Heaven is still open. Do we see it? If we cannot raise our eyes and look at   the  heaven we will  instead look around  to  see only our enemies.

Let us  pray to God for opening our eyes to  see  those who protect us in times of tribulation. What Elisha’s servant  could see was only the fast approaching army of  the enemies with  horses and chariots around the city. But what  Elisha  saw  was a  mountain full of  horses and  chariots of fire all around him to protect him from the enemies.  Elisha, the prophet  filled with God’s Spirit prays for  his servant, an ordinary mortal; ‘O Lord, please open his eyes that he may see” (2 Kings 6:17). Then only the servant  could see the grand spectacle of   heavenly armies  standing alert to  protect the servant of the Lord.

St. Stephen, you were full of zeal for the glory of God; pray that the Holy Spirit may continue to renew us in our mission to help save souls. St. Stephen, you now live with Jesus forever in heaven. Pray that we may be granted the grace of final perseverance. Amen.

AN ACT OF CONSECRATION TO THE HOLY FAMILY

A Day For Prayer