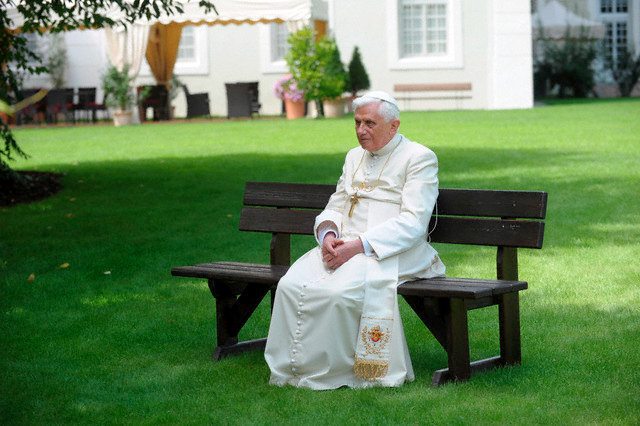 ————————————————————-
“I cannot be silent!”
These are not my words. These are the words of St. Augustine. What prompted Augustine to speak out? It is the simple fact that he was accountable for the sheep entrusted to his care.

After seventeen centuries, Augustine’s words still echo in the wilderness of our current predicament. Often we are tempted, forced,tempted, coerced or allured to keeping silence. Many a time, we find it more convenient to be silent rather than antagonise our friend, our spouse, our children, our parish priest, our boss, our co worker or our leader. By remaining silent we may even earn their applauses!

But Pope Emeritus Benedict XVI would beg to differ with us. For him silence is too heavy a price when compared to its momentary gains. That is why he repeated Augustine’s words; “I cannot be silent. I know indeed how pernicious silence would be for me. It is to Christ that I will have to account for the sheep entrusted to my care. I can’t keep quiet or pretend ignorance”. Benedict XVI was not alone. Cardinal Robert Sarah, the Prefect of the Congregation for Divine Worship and the Discipline of the Sacraments, also spoke on similar lines.

These two great men were speaking from the depths of their hearts. It is from a book aptly titled ‘ From the Depths of our Hearts: Priesthood, Celibacy and the Crisis of the Catholic Church’ co-authored by them. Its French version was released on 15th January 2020. In its introduction, they say the book was born out of silence, prayer and a series of conversations and letters they exchanged in recent months. Excerpts from the book are available in the public domain.

What is the issue that prompted these two shepherds to publicly declare that the time to remain silent is over? Well, it is the ‘controversial’ issue of priestly celibacy. I deliberately used the adjective controversial, because any true catholic would be happy to have a celibate as their parish priest, rather than a married person dividing his time between his family and Christ. For them there is no need for any controversy regarding the issue involved in it. They have been used to celebate priests and they prefer it. For them the issue was settled long back. Their role model, Jesus Christ, was celibate. Ideally, his vicars also should be celibate. Yet the issue is controversial today!

How does an already issue settled centuries back, pop up all of a sudden and become controversial overnight? Here comes the twist. If there are not enough celibate persons to take up priesthood? Naturally it will affect the pastoral needs of a large number of believers. Then what is the remedy? This was one of the hot topics deliberated upon in the Amazonian Synod of October 2019. Pope Francis set the tone of the synod by declaring that he personally believed that celibacy is a gift to the Church and did not agree with allowing celibacy as an option. However, he made it sure that there remained ample space for rethinking the centuries old norms about priestly celibacy. In his own words, he was in favor of ‘envisaging some possibilities for very remote places like the Pacific Islands, where there is a pastoral necessity’.

We know how the synod progressed regarding the issue and finally came out with a draft document. Its section 111, passed by a whopping two thirds majority declares: ‘We appreciate celibacy as a gift of God to the extent that this gift enables the missionary disciple, ordained to the priesthood, to dedicate himself fully to the service of the Holy People of God’. This is in line with what Pope Francis said much before the synod. We can only hope that the final synodal document will prescribe what is best for the Church.

However, the draft synodal document goes on to inform us that ‘some of the synod fathers were in favor of a more universal approach to the subject and therefore proposed that suitable and respected men of the community with a legitimately constituted and stable family, who have had a fruitful permanent diaconate and receive an adequate formation for the priesthood, be ordained in order to sustain the life of the Christian community….. in the most remote areas of the Amazon region’. Pope Francis also suggests the same. Here the key words to focus are ‘remote areas’ and ‘sustaining the life of the Church’. If celibacy norms can be diluted for remote areas like Amazon, couldn’t the same apply to Philippines and India? If Amazon region is permitted the luxury of married priests, why should we discriminate them with the Germans who also support married priests. In fact, some bishops from Germany have already gone on record saying that they would support relaxation of celibacy norms for priests. As for sustaining the life of the Church, is married priests the only, or at least the best, available option? Unattended questions remain.

Are we going to have married priests soon? Only time will tell. Because the final document of the synod approved by Pope Francis is yet to be released, ie. at present we don’t know what the final synodal document would look like. In the meantime the views expressed by the Pope Emeritus and a reputed Cardinal who is the prefect of an important Vatican office are in the public domain. Both vehemently oppose any liberalisation in celibacy norms for priests. For them, a priest is wedded to the Church and his entire time, energy, efforts and faculties should be channelled towards the one and only duty assigned to him viz. pastoral care. Cardinal Robert Sarah’s view is that the flock should not be deprived of a priesthood lived to the full. People of Amazon cannot be offered what he calls ‘second class priests’.

Benedict XVI examines priestly celibacy from a historical perspective and comes to the conclusion that Holy Orders to married men were reserved to those who were committed themselves to sexual abstinence, that is to say , to a Josephite marriage. There cannot be priesthood without a total renunciation of the world. Family bonds are the biggest obstacle for this total renunciation. Mission of the priest is to stand before Jesus. Priest must be a person full of rectitude, vigilance, and who stands upright. Priorities of his life should start from prayer. Celibacy is best suited for such a life.

Hope the book ” From the Depths of Our Hearts: Priesthood, Celibacy and the Crisis of the Catholic Church”, a gift to the universal Church by her renowned sons Pope Emeritus Benedict XVI and Cardinal Robert Sarah, help us, clergy and laity alike, in understanding and appreciating priestly celibacy from a truly catholic angle. Priestly celibacy is not its sole theme. It is also about the lasting crisis that the priesthood has been going through for many years as also about the nature of the Church and Christian discipleship.

“It is these who have not defiled themselves with women, for they are virgins; these follow the Lamb wherever he goes. They have been redeemed from humankind as first fruits for God and the Lamb, and in their mouth no lie was found; they are blameless” ( Revelation 14:4-5).

A Prayer Of Expiation

AN ACT OF CONSECRATION TO THE HOLY FAMILY