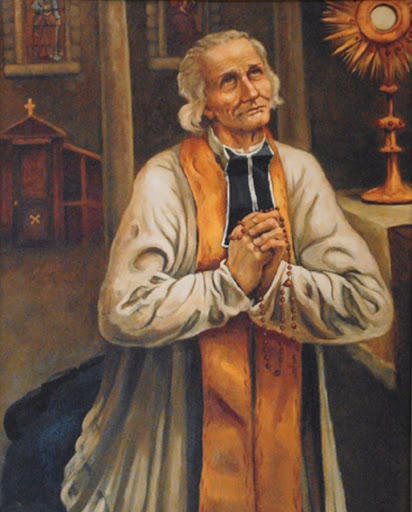 We should thank God at all times   about  our  legacy, which is not  because of  our merits, but because  God’s grace made us so. For the chosen race, God chose royal priests as well. Seven sacraments, which  are the channels of  grace, are being  administered  by priests. We are God’s own people  blessed with  God’s  anointed priests in large numbers  to serve us  in the name of the Lord.

Whenever we think of  priests, the first name coming  to our mind is that of  St John  Maria Vianney. He was an ordinary priest bestowed with extra ordinary gifts. If he could remain in the  confessional  for hours together, often  extending to sixteen  hours, how can we explain  it but for the  special grace  with which God blessed him?

He was an ordinary student, a mediocre seminarist, an armed forces deserter who  hid himself with a group of army deserters for  more than one year. He was no great orator.  Then what  made this  man   the most sought after priest in his times, not only in France, but   other countries as well? How come that  around 20000 pilgrims  travelled to Ars from  distant places every year,  just  to visit him?

The reason is that he was a true pastor.  He followed none but  Jesus Christ. He  taught nothing but the gospel. He  administered  nothing but sacraments. He preached nothing but repentance.  It may be difficult for us to believe that such a priest lived among us  in the  not so distant past. He was  concerned about nothing but the  salvation of souls.

Catholic Church has rightly designated him as the patron saint of parish priests and honours his memory on 4th August, which is  his  date of birth into eternal bliss.

What he did in Ars was  the same thing any  true pastor is supposed to do. He tended his flock with  love. He foretold them about the traps the devil had  set for them. And most important, he went  out  in search of the lost sheep. Until the last sheep was  brought  back   he didn’t know rest. He was the quintessential pastor.

“Thus said the Lord my God: Be a  shepherd  of the flock doomed to slaughter” ( Zecheriah 11:4). As for the  people  of Ars  they were a lot   doomed  to slaughter when  John Maria Vianney reached there. It was the period after the French revolution which  brought with it large scale devastation and loss of faith. People of Ars  had forsaken their faith and set aside Sundays for drinking and  dancing. An old church stood there sans the faithful.They were treading the wrong path, totally unconcerned about  the destiny of their souls.  They were on the fast  track  to the slaughterhouse of the devil.

He recaptured them from the  clutches of  the devil. He made them  his own flock and tended them well. May his memory be blessed.

After reading this, many  would wonder; ‘But our parish priest is not like  John Maria Vianney”.  True, there can be worthless shepherds too.

“Then the Lord said to me: Take once more the implements of a worthless shepherd.  For I am now raising up in the land a shepherd who does not  care for the perishing, or seek the wandering, or heal the maimed, or nourish the  healthy, but devours the flesh of the fat ones, tearing off even their hoofs” ( Zecheriah 11:15-16).

If it happened in Israel, it can happen  in the Church too. But we are told to follow the  good shepherd. Look around and  you will see hundreds of good priests in the Church. Each one is a miniature of  the Saint of  Ars.   Remember the  video of a young Catholic Priest braving  heavy rain in a busy  street of an American city  and rushing to a  person, who was  in his last moments  following a motor accident. This  good shepherd hurried there without anybody inviting him. His  intention was  to console the victim and  give him the  last  sacrament.  We don’t know his name, nor did he  care  for  telling us who he is.

Remember  the group of  eight priests in the Dallas diocese, who volunteered to  take the sacraments to  those dying of  Covid-19. Remember the hundreds of priests across countries, who against all odds, ensured that their flock are  not deprived of the most essential things: the Holy  Communion, Confession and  Anointing the sick.

Let us thank God for sending us  such wonderful pastors   who risk everything to  save a soul. They  love their flock because they themselves love God.  It is  all about  loving God  of  which  St John Vianney used to sing:

“I love You, O my God, and my only desire is to love You until the last breath of my life.

I love You, O my infinitely lovable God, and I would rather die loving You, than live without loving You.

I love You, Lord and the only grace I ask is to love You eternally…

My God, if my tongue cannot say in every moment that I love You,

I want my heart to repeat it to You as often as I draw breath”.

If you find yourself blessed with this article, do not hesitate to share it with your pastor.

May Jesus the good shepherd keep all of  us  safe in this perilous times.

Litany Of The Blessed Virgin Mary

DEVOTION TO SAINT ANNE: MOTHER OF THE BLESSED VIRGIN MARY